Understanding Under a Crab Apple Tree

The stench of musk filled the air as fans of paper moved around fat necks.  Mouths were propped open either panting or praying, while heads bobbed back and forth. A boy sat in a pew, nervously. He tried to see the small face of Jesus contorting in pain, but a giant floral hat blocked his view. He rubbed his sweaty palms together as he stared at his dress shoes. The suit he wore fit loosely around his body, tight around his neck.

He pulled it out while clenching his teeth, eyes still focused on the small man tacked to the wood.  He looked over at the pulpit, the Reverend looked troubled, the normal heavenly light in his eyes held something darker. He preached about morality or something like that, always speaking more with his hands and his voice than his words.  The boy looked at his father, sitting upright with his chin and chest puffed out. He bellowed the words of the Lord in a monotone voice. The boy looked at the fat woman in the choir, beads of sweat poured down her neck and over her chest like rain.  His eyes followed one into her blouse, immediately ceasing when she noticed.

When mass was over he took his usual trail home, a long and narrow strip of dirt leading from the back of the church into the woods, and then out to the main road. His parents stayed back for the Sunday brunch, an endless sea of finger sandwiches and lemonade. He was forced to attend them when he was a child, the awkward kid in the corner that just stared at everyone. The Reverend would always rub his head yelling “Why won’t you join the rest of us kid?”

The boy, much younger at the time, looked up at the Reverend’s giant hand.  He would move his eyes all the way up to the man’s lips, and come to a screeching halt. The hook shaped line on the top lip always scared him. It would change shape with every expression, almost like a second smile.  He didn’t notice the scar on that particular Sunday morning. He was too focused on the worry behind the Reverend’s beady eyes.

He wondered if it was the same worry he held. The same night sweats that woke him up in the early morning hours. The same tingling in his legs that made him feel paralyzed. His mother told him to pray, pray for God’s forgiveness.  “He will save you,” she said robotically one day at the dinner table. “That itching you have, that trembling, that need to scratch, that is sin my boy, and it is trying to get inside.  It is your job to not let it in.” She was talking in symbols. He tried praying, his hands were always clammy. He never looked directly up at the sky, he was more comfortable talking to the floor or the sheet on his bed.  Was he talking to the devil instead?

He mulled these questions over in his head as he walked to school. He had time, so he decided to visit the church, take another crack at this whole praying thing.  The grass was still wet from the morning dew; the hot air smothered the trees. As he neared the end of the trail, he saw something under the small crab apple tree at the far end of the church property. At first he thought it was the shadow of its leaves, or maybe a log. He drew closer, each foot stumbling over the other. There before him lie two bodies, one a man, the other a woman.

The man’s face was covered by a large hat, the woman’s was exposed. The boy leaned down, carefully moving the hat to the side. He froze. Right where the hat peacefully sat was a white line in the shape of a hook. He pushed the hat over with furry.  The Reverend’s beady eyes glared at him. There was one single gunshot through the side of his head. Those eyes. They saw the boy’s sin, his fear.  The reverend’s mouth was taught, not gaping with the word of God. His arms lay still, and for once were not hidden by giant sleeves. He had small hands, leathery in appearance, the nails yellow. Each individual finger was fat, like sausages. The one hand looked as if it was trying to make a fist. Was he fighting evil and lost?

The boy decided to return the hat to its final resting place. The scar was hidden, as if it never existed.  He turned his attention to the body lying beside the Reverend. Her face was not hidden, the three bullet holes screamed at him. She looked familiar, but he did recall from where. Then he saw her neck. Small white creatures wiggled around inside of it, some spilling out onto the onion grass below her.  He placed his hand over the little workers, feeling the heat rising from their feast.  Her ice blue eyes were big and weary, staring off to the side. He could not take his eyes off her neck, a place that was once used to keep her head upright, now a banquet hall. It did not look as sweaty as before.  The boy rose from his knees and tipped his head to the couple. “Rest in Peace,” he said, looking down at the ground instead of the sky.

Near their feet was a bunch of torn up notes. The handwriting was obviously feminine, calligraphy style. The boy always watched his mother write letters, inspired by the way her hand moved like a gracious wave in the ocean, each loop representing a new swell.  He could not make out the words, except for one,  Edward.  He shoved the piece of paper into his jacket pocket. He started to walk back towards the path, turning one last time to see the couple. Both pairs of feet pointed towards the crab apple tree. Her feet were slightly pigeon toed, his turned slightly outward. He picked a crab apple off the ground and brought it up to his nostrils. Its sour aroma invaded his airways.  He placed it in between the two bodies, moving both tiny hands to reach for it. He made the sign of the cross, bowed, and turned back to his original path. He looked up at the sky, mouthing “Amen.” 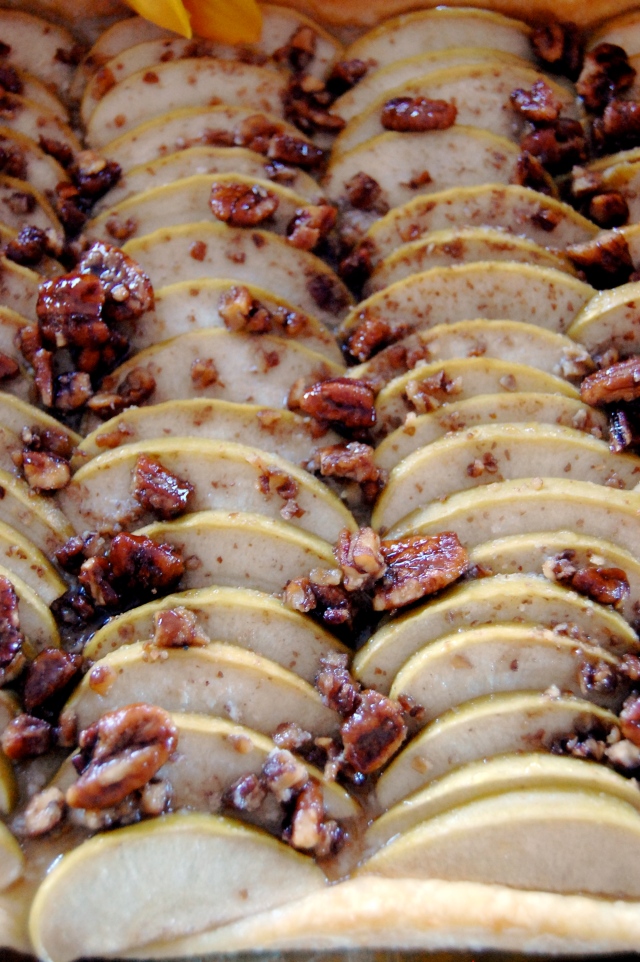