This is where I picked up This is Where I Leave You by Jonathon Tropper. This is Where I Leave You is about a man named Judd Foxman who simultaneously mourns the death of his father, as well as his marriage to high school sweetheart Jen. Judd attempts to regain normalcy while suffering from a mental demise via an early mid-life crisis and with help from an overwhelmingly dysfunctional family.

One of my favorite scenes from this novel is when Jen’s affair is revealed. When the first line of Chapter 3 began with, “My marriage ended the way things do: with paramedics and cheesecake,” I knew it was going to be a good read. 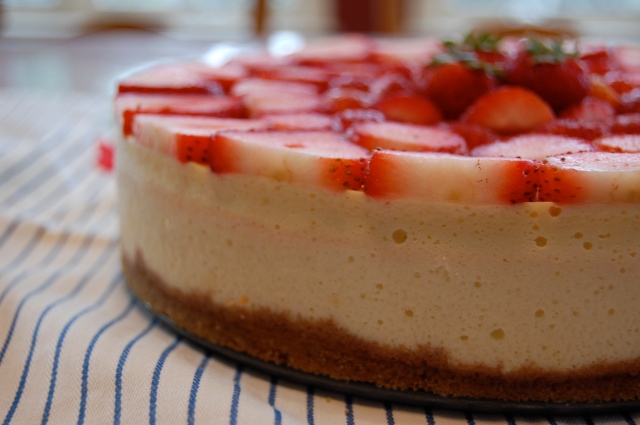 It’s Jen’s birthday and an unassuming Judd leaves work early and picks up a strawberry cheesecake to surprise her. However, he is the one left surprised. After hearing a series of strange noises coming from he and Jen’s bedroom, he walks in, only to find his radio show host boss on top of his wife. Logically, he throws the cheesecake at his boss, which ends up in flames…. Yes, it’s an inflammable cheesecake.

I’d explain more as to why the cheesecake became a culinary fireball, but it’s more R-rated, and I like to keep things PG on The Baker in the Rye.

I had no choice but to forever memorialize this scene as a strawberry cheesecake, but I promise this one won’t end up in flames, just in your bellies.

2 Cups (or so) of boiling water

** It is important that all ingredients are room temperature to prevent lumping.

“I want very badly to be in love again, which is why I’m in no position to look for it.” ~This is Where I Leave You

2 Responses to Paramedics and Strawberry Cheesecake